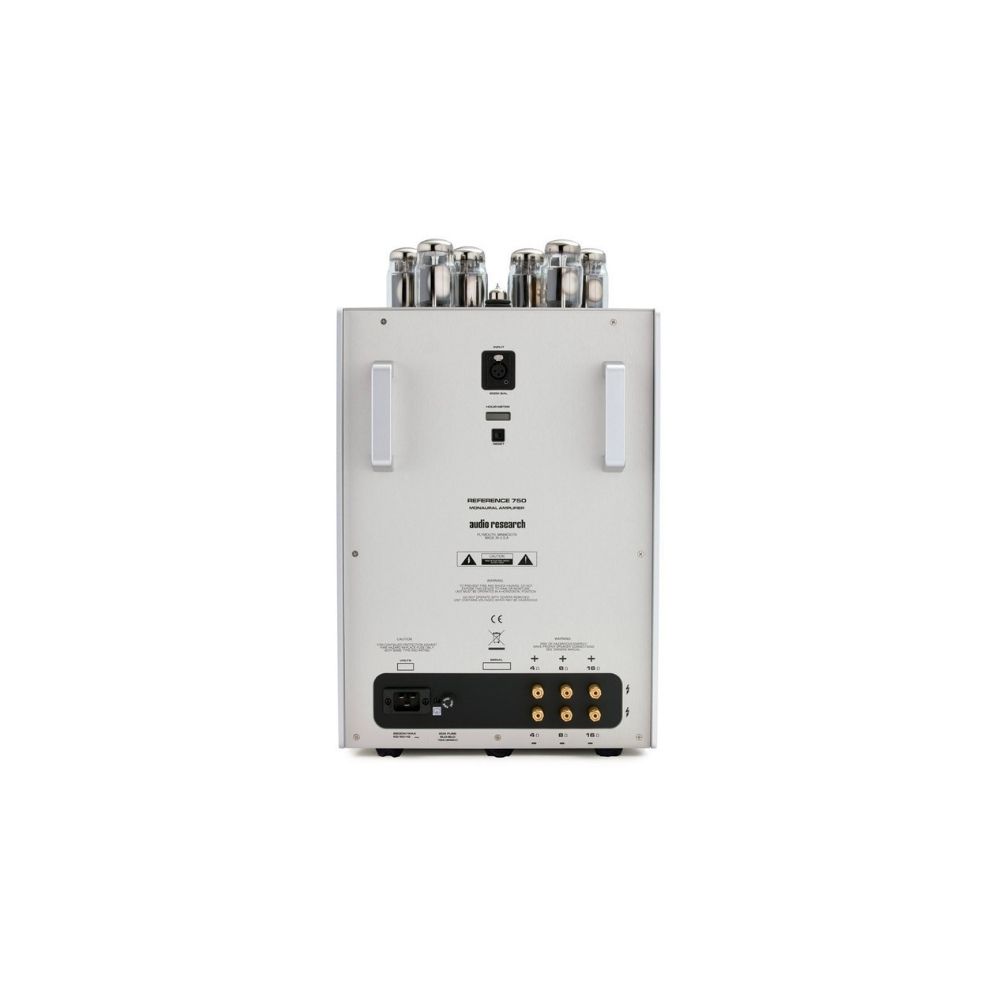 The Reference 750SE monobloc amplifiers continue the story began nearly 20 years ago with the introduction of the Reference 600; that is, to create an ultimate, tube-driven amplifier with enough power to drive any speaker load, and provide a musical experience unlike any before it.  The Reference 750SE redefines all expectations of what is possible from an amplifier in a music playback system.  It is the culmination of everything Audio Research knows about amplifier design and manufacture – High Definition in its purest, most dynamic form.

Listening to Reference 750SE monoblocs in a high performance system is a transformative experience; under total control, speakers disappear from the listening room and transport the listener into a three-dimensional realm where music takes on a palpable, tangible form.  Details from source material are resolved against a black background, painting images in space with vivid reality.  Bass becomes the foundation on which this living performance develops, produced with startling temporal and timbral accuracy.  Here is the breath of the performer, the pick against the string, the brilliance of a full orchestra.

The Reference 750SE is prepared to deliver 750 watts of power into speaker loads of 4, 8 and 16 ohms.  This is achieved by the use of a massive, custom- built power transformer delivering current from sixteen KT150 vacuum tubes.  Thanks to extensive testing and strict selection of tubes, the amplifier requires little maintenance and obviates the need for costly and sonically deleterious automatic bias systems.  Power supply regulation is also achieved by vacuum tube with a 6550WE and 6H30 driver.  The bulk power supply energy storage has been increased to 1300 joules, a 30% increase over the preceding REF610T.  Tube bias is controlled by two KT150 tubes, each driving a bank of eight tubes.

Visually, the Reference 750SE is a monolithic tower design, finished with monochromatic panels for a clean, contemporary appearance.  The front panel displays two analog meters, one for output wattage and bias, and the other for incoming A.C. line voltage.  Four buttons beneath the top meter control meter brightness, bias power and fan speed (for the optional ventilated top covers).  The back panel has taps for 4, 8 and 16 ohm loads, as well as a tube hour running time display.  Power connection is via a 20A IEC connector and cable.  Each unit weighs approximately 170 pounds (77 kg).

POWER OUTPUT
750 watts per channel continuous from 20Hz to 20kHz. 1kHz total harmonic distortion typically 0.5% at 750 watts, below .04% at 1 watt. Approximate actual power available at “clipping” 850 watts (1kHz). (Note that actual power output is dependent upon both line voltage and “condition” i.e. if power line has high distortion, maximum power will be affected adversely, although from a listening standpoint this is not very critical.)

The State of The Art in Music Reproduction