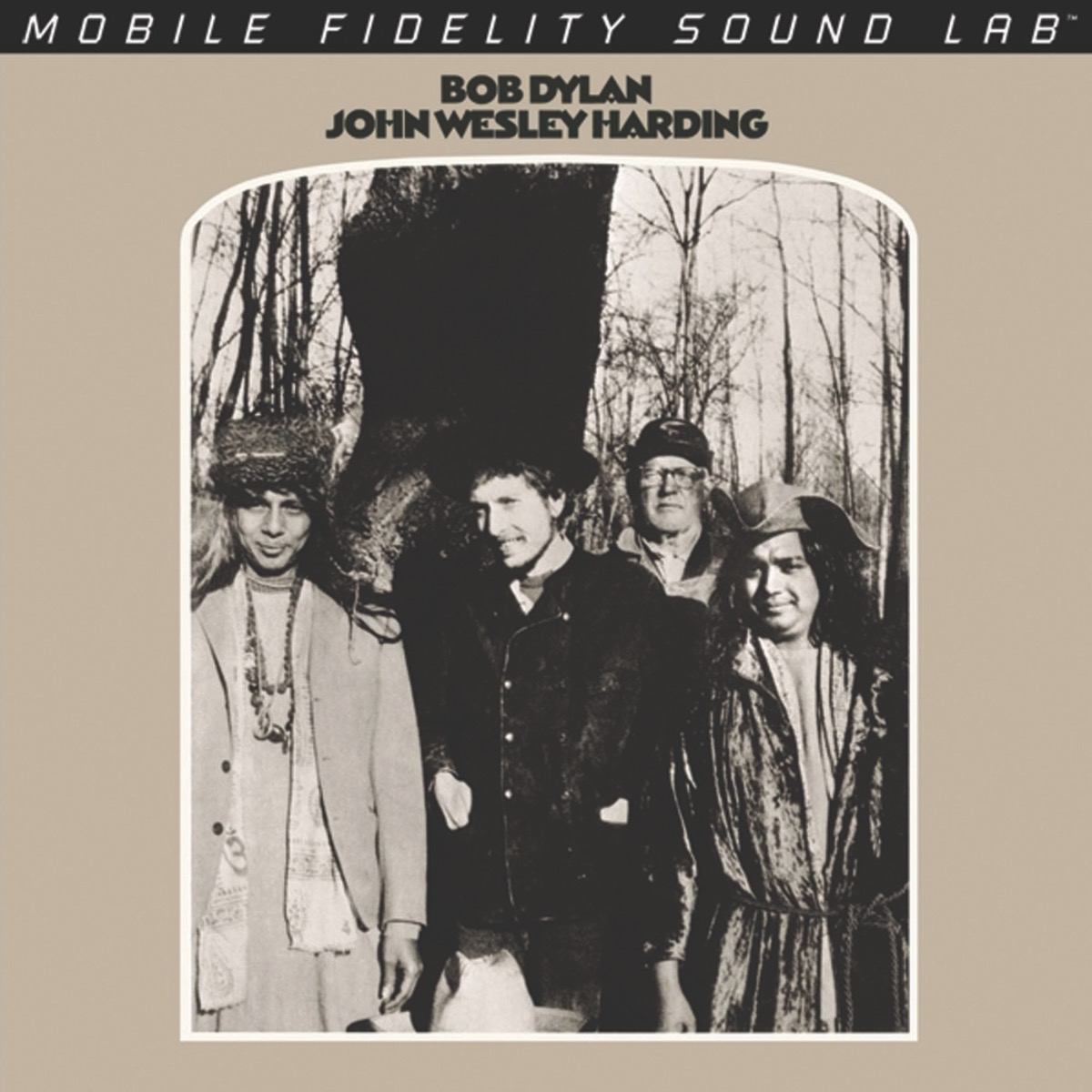 Hear Musical Cousin to The Basement Tapes as Dylan Intended It to Sound: Mobile Fidelity Vinyl 2LP Mastered from the Original Master Tapes, Pressed at RTI, and Strictly Limited to 3,000 Copies.

Leave it to Bob Dylan to follow three of the most pioneering electric-based albums in history by deviating from the norm and straying from expectation – but continuing to work in the mono format. Hinting at a return to his folk roots and firmly pointing toward the field that became country rock, John Wesley Harding breathes with reassurance and freshness, the unobtrusive sound of an artist re-engaging with the past, forging a future, and stepping into new realms after recovering from an accident and unimaginable pressure.

Mastered from the original master tapes, pressed at RTI, and strictly limited to 3,000 copies, this restored mono version presents the 1967 album with finite details and in the original sound Dylan intended. Immediately notable for the slimmed-down instrumentation, brisk flow, and simple approach, the record continues to endure via a rustic, era-defying naturalism tied to the organic sounds and warm production swathing Dylan’s acoustic guitar, mellow voice, breezy harmonica, and minor accompaniments. All these traits translate with incredible realism and lifelike air on this reissue, which also brings out the low end of Charlie McCoy’s bass with previously unheard character. With the advantage of wider and deeper grooves, the 45RPM pressing also affords the opportunity to detect more information and lavish in the extra richness.

The preferred mix at the time of the recording, the mono version presents Dylan with unparalleled directness. Since the separation of the stereo versions isn’t as sharp, this mono edition places Dylan’s vocals in the heart of the musical action and as one with the all-star accompaniment. It paints listeners an incredibly accurate portrait of the attention-getting, concrete mass of sound that features no artificial panning and straight-ahead immersion into the music. As much as any Dylan record, the music here fits the mono spectrum to a proverbial ‘t.’

Recorded around the same time as the sessions that yielded The Basement Tapes, John Wesley Harding came together after just three studio sessions and approximately 12 hours of time. While many specifics are shrouded in mystery, a majority of songs are tied to Biblical figures, ominous matters, and morality themes. Making not just a clear sonic break from his most recent efforts, but a songwriting transformation as well, Dylan embraces a strict economy of scale, dropping beat-poetry techniques in favor of stanzas that waste no words and progress narratives at every turn. It’s as if the Bard is saying that truth is spoken here. Few, if any artists, have captured the American myth and its population of immigrants, drifters, and outlaws with such convincing scope and parabolic sagacity.

Combined with the lyrical evolution and unabashed move towards country conventions, Dylan manages to turn popular music on its side, forging a subdued hybrid style no other peers had yet attempted. Arriving during a period of intense experimentalism and psychedelia, John Wesley Harding functions as a sigh of relief, a piano- and pedal steel-flavored set steeped in requisite simplicity in an environment that was increasingly marked by chaos and madness.

Climbing to number two on the Billboard charts and quickly tallying one million in sales, the pared-down work resonated with a public ensnared by its myriad charms. Then, of course, there’s the utter brilliance of every one of the songs here, each seemingly occupying a timeless space that suggests they could’ve been made in 1967, 1937, or 2007. With “All Along the Watchtower,” Dylan landed upon a tune that would soon become one of the most-covered and revered tracks in history. And yet it isn’t even a standout on an album on which every note just belongs.

Ranked the 301st greatest album of all time by Rolling Stone, it’s nothing less than seminal.
TRACK LIST

1. John Wesley Harding
2. As I Went Out One Morning
3. I Dreamed I Saw St. Augustine
4. All Along The Watchtower
5. The Ballad Of Frankie Lee And Judas Priest
6. Drifter’s Escape
7. Dear Landlord
8. I Am A Lonesome Hobo
9. I Pity The Poor Immigrant
10. The Wicked Messenger
11. Down Along The Cove
12. I’ll Be Your Baby Tonight