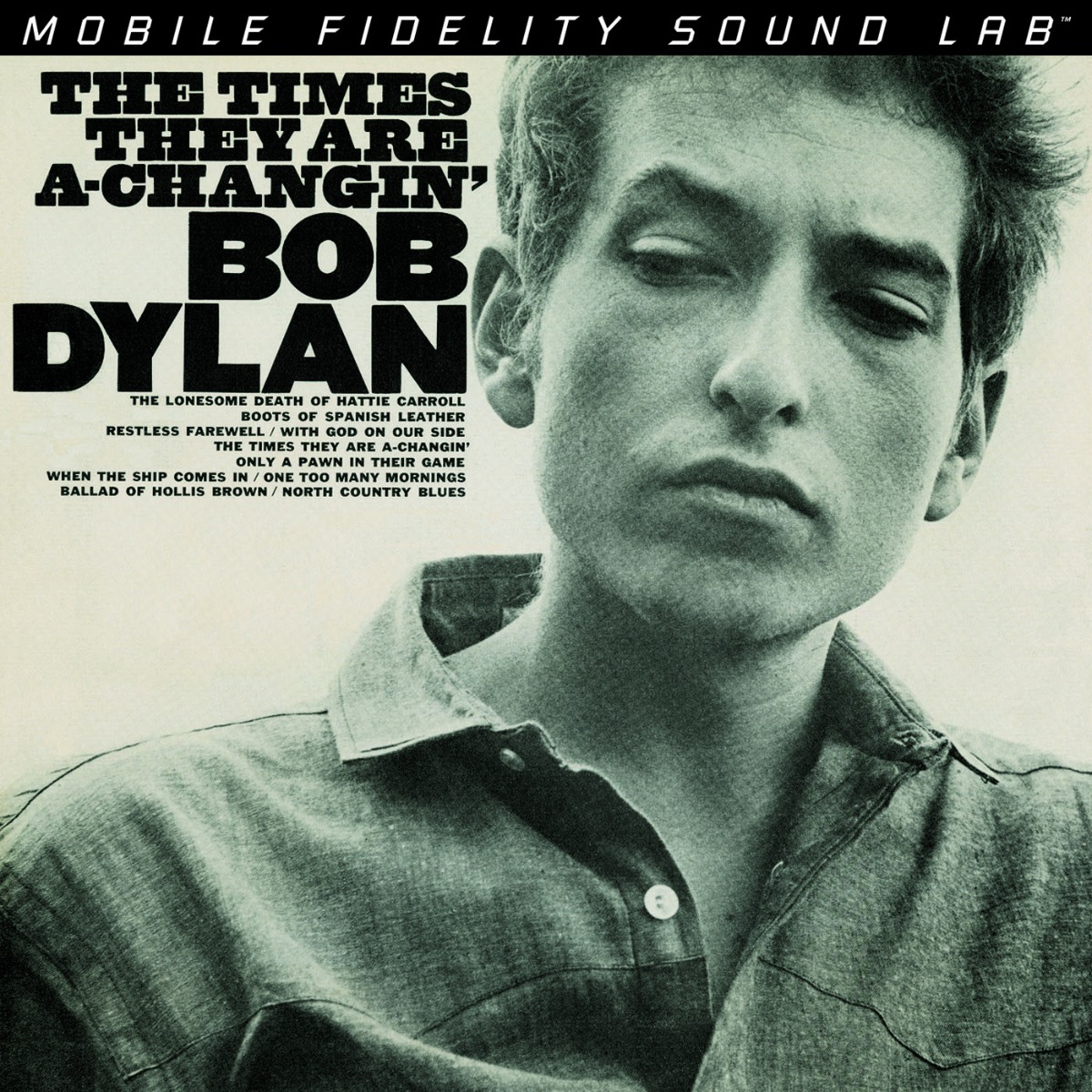 Mofi: Bob Dylan – The Times They Are A Changin’ (MFSL 2 LP MONO)

Mofi: Bob Dylan – The Times They Are A Changin’ (MFSL 2 LP MONO)

Title Track of The Times They Are A-Changin’, “The Lonesome Death of Hattie Carroll,” “With God on Our Side” Establish Bob Dylan as Voice ofocial Consciousness and 1960s Movements.

Immediately distinguished by the direct mono sound and you’re-either-with-us-or-against-us messages of the landmark title track, Bob Dylan’s The Times They Are A Changin’ sounds an unmistakable clarion call on behalf of progress and its unstoppable advancement. One of the Bard’s trademark songs, it remains a timeless anthem with a clear sense of common purpose, a musical line in the sand that helped unite various social movements and multiple generations. The reverential 1964 record feeds off the opening tune and its unmistakable sentiments, marching forward to confront racism, poverty, injustice, and upheaval in a stark, immediate manner like few albums before or since.

Mastered from the original master tapes and pressed on 180g LP at RTI, Mobile Fidelity’s restored 45RPM analog version delivers the landscape-shifting music in reference-quality mono sound that transports you to Columbia’s Studio A. Reflecting the austerity of the topics and Dylan’s mood, the sonics are direct and unadorned—each word hitting with weight, each phrase lingering until it pulls you under, each storyline echoing as fact. The hollow body of Dylan’s guitar, internal mechanisms of his harmonica, and graininess of his throat come across in full-on detail. Wider grooves mean more information reaches your ears.

As the preferred mix at the time of the recording, the mono version presents Dylan as he and his producers originally intended. Since the separation of the stereo versions isn’t as sharp, the mono edition places Dylan’s vocals in the heart of the musical action and as one with the accompaniment. It paints listeners an incredibly accurate portrait of the attention-getting, concrete mass of sound that features no artificial panning and straight-ahead immersion into the music. This is how almost everyone first heard this timeless album—making the mono mix all the more historically valuable and truthful.

Marking a shift from the looseness and comedy that pepper the preceding The Freewheelin’ Bob Dylan, The Times They Are A-Changin’ skirts any attempt at humor, sarcasm, or goofiness in favor of utmost seriousness and severity. Seemingly anticipating the dark events surrounding President Kennedy’s assassination and the turmoil that followed, Dylan eliminates with conjecture and disguise. Akin to dispatches from the typewriter of literary icons John Steinbeck and William Faulkner, his songs give voices to the voiceless, challenge cultural precepts, upend traditional beliefs with rapier wit and truths, and underline tragedies swept under the rug.

In doing so, Dylan creates stinging protest music that rallies against unchecked authority, discrimination, brutality, and division. A testament to the power of great art, The Times They Are A-Changin’ is a righteous assault on ignorance and agent for sweeping action, a necessary impetus for transformation and enlightenment. Via bold originals such as the nonfiction “The Lonesome Death of Hattie Carroll,” assertive “Restless Farewell,” and semi-autobiographical “North Country Blues,” Dylan casts hardships, greed, and victimization in such relatable terms it’s impossible to turn away and ignore their implications.

As correctly relayed by Dylan expert and cultural critic Greil Marcus, “[The record] forever fixed Bob Dylan in the popular imagination: the protest singer, the young man ‘able to see through metal’ (again, from Chronicles), to see through the lie and find the truth, then to hammer the truth into words and send them out with a voice that would never break.”

1. The Times They Are A-Changin’
2. Ballad of Hollis Brown
3. With God on Our Side
4. One Too Many Mornings
5. North Country Blues
6. Only a Pawn in Their Game
7. Boots of Spanish Leather
8. When the Ship Comes In
9. The Lonesome Death of Hattie Carroll
10.Restless Farewell

Mofi: Bob Dylan - The Times They Are A Changin' (MFSL 2 LP MONO)