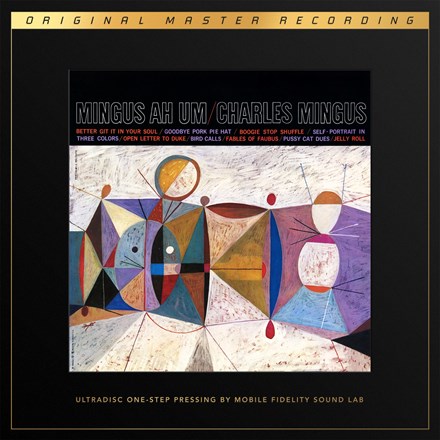 “Better Git It in Your Soul” not only serves as the name of the inviting, holler-appointed opening track of Charles Mingus’ Mingus Ah Um. It epitomizes the spirit, urgency, freedom, and feel-it-in-your-bones passion of an album that – along with Miles Davis’ Kind of Blue, Dave Brubeck’s Time Out, and John Coltrane’s Giant Steps – forms the Mount Rushmore of quintessential records from 1959-1960, jazz’s watershed graduating class. Indeed, Mingus Ah Um is cited on practically every “greatest” list assembled and enjoys the rare distinction of wearing a prestigious crown in the Penguin Guide to Jazz and membership in the Grammy Hall of Fame. Now, it receives the highest sonic treatment available in the form of a reissue worthy of its preeminent creative stature while also presenting the songs at their original lengths, and without the edits of many other versions.

Strictly limited to 6,000 numbered copies and pressed on MoFi SuperVinyl at RTI, Mobile Fidelity’s ultra-hi-fi UltraDisc One-Step collector’s edition makes Mingus Ah Um pop with unprecedented vibrancy, command, energy, and scale. The bassist’s church-music roots spring to life in the form of blues themes, moaned vocals, spiritual motifs, and preacher-inspired riffs that register with hyper-realistic dimensionality and natural intimacy. Experienced as a seamless whole – just as the cigar-chomping composer intended – the band enters your listening room, its intertwined assembly of notes, phrases, pauses, shapes, and solos yielding something more music. What you hear here is the formation of aura and atmosphere traditionally only associated with live concerts. Such is the allure of UD1S and MoFi SuperVinyl.

Developed by NEOTECH and RTI, MoFi SuperVinyl is the most exacting-to-specification vinyl compound ever devised. Analog lovers have never seen (or heard) anything like it. Extraordinarily expensive and extremely painstaking to produce, the special proprietary compound addresses two specific areas of improvement: noise floor reduction and enhanced groove definition. The vinyl composition features a new carbonless dye (hold the disc up to the light and see) and produces the world’s quietest surfaces. This high-definition formula also allows for the creation of cleaner grooves that are indistinguishable from the original lacquer. MoFi SuperVinyl provides the closest approximation of what the label’s engineers hear in the mastering lab.

The lavish packaging and gorgeous presentation of the UD1S Mingus Ah Um pressing also befit its extremely select status. Housed in a deluxe box, it features special foil-stamped jackets and faithful-to-the-original graphics that illuminate the splendor of the recording. No expense has been spared. Aurally and visually, this UD1S reissue exists as a curatorial artifact meant to be preserved, pored over, touched, and examined. It is made for discerning listeners that prize sound quality and production, and who desire to fully immerse themselves in the art – and everything involved with the album, from the images to the textures.

And clearly, Mingus ardently honored and prized the aforementioned aspects on his Columbia Records debut. Witness the unforgettable cover art, a painting by S. Neil Fujita, whose varied hues, abstract geometries, free-base forms, and ornate albeit clean presentation mirrors the seemingly impossible blend of accessibility, complexity, experimentalism, consistency, focus, individualism, and collectivity reflected in every passage of the incredibly diverse album. Or, simply look at the reverence Mingus displays for his ancestors – and their contributions to jazz’s ongoing conversation and cultural relevance – via “Jelly Roll” (for Jelly Roll Morton), “Open Letter to Duke” (for Duke Ellington), and the hallmark ballad “Goodbye Pork Pie Hat” (an homage to Lester Young).

Above all, however, Mingus Ah Um stands as an exuberant tribute to the idea (and blueprint-caliber execution) of fully realized musical frameworks serving as launching pads for expressive interactions, responses, exchanges, and improvisations. At the core, personality, character, invention, and, color remain paramount. Mingus Ah Um acts as an aural representation of a philosophy the artist espoused before and after the recording sessions. In the liner notes to the record’s follow-up, and penned shortly after the recording of Mingus Ah Um, he spoke of striving for “primitive, mystic, supra-mind communication” and avoiding the repetition, boredom, apathy, and cliché associated with falling into set patterns and mimicking the approach of recognized giants. In other words, he demanded each member of his band “play himself.”

Nothing could be truer when you hear in such vivid detail the work of saxophonists John Handy, Shafi Hadi, and Booker Ervin, trombonists Willie Dennis and Jimmy Knepper, pianist Horace Parlan, drummer Dannie Richmond, and the genius bass playing of Mingus himself. The collective’s technical acumen – be it multi-tone row scales, pedal point rhythmic patterns, traditional chords, melodic moods, harmonic lines, beginning/ending-blurring context, high registers, major and minor thirds (and absence thereof), pivot-point chromatics, diatonic manners, open fifths, and more – lingers not only in the mind, but invigorates the senses.

More About Mobile Fidelity UltraDisc One-Step and Why It Is Superior
Instead of utilizing the industry-standard three-step lacquer process, Mobile Fidelity Sound Lab’s new UltraDisc One-Step (UD1S) uses only one step, bypassing two processes of generational loss. While three-step processing is designed for optimum yield and efficiency, UD1S is created for the ultimate in sound quality. Just as Mobile Fidelity pioneered the UHQR (Ultra High-Quality Record) with JVC in the 1980s, UD1S again represents another state-of-the-art advance in the record-manufacturing process. MFSL engineers begin with the original master tapes and meticulously cut a set of lacquers. These lacquers are used to create a very fragile, pristine UD1S stamper called a “convert.” Delicate “converts” are then formed into the actual record stampers, producing a final product that literally and figuratively brings you closer to the music. By skipping the additional steps of pulling another positive and an additional negative, as done in the three-step process used in standard pressings, UD1S produces a final LP with the lowest noise floor possible today. The removal of the additional two steps of generational loss in the plating process reveals tremendous amounts of extra musical detail and dynamics, which are otherwise lost due to the standard copying process. The exclusive nature of these very limited pressings guarantees that every UD1S pressing serves as an immaculate replica of the lacquer sourced directly from the original master tape. Every conceivable aspect of vinyl production is optimized to produce the most perfect record album available today.